Originally from earlduque/ServiceNow-Developer-Training. Thanks Earl!

Other Things to Try

What are Client Scripts?

Some of the things that client scripts can do include:

There are a few different kinds of scripts: 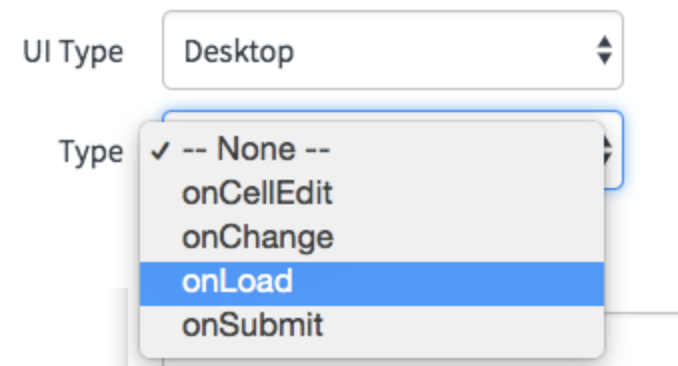 Client scripts configure forms and their fields/values through an API (Application Programming Interface) called GlideForm. You can call GlideForm API through g_form to do things like: highlight area, get info or set value for field
change choices in a list

Here's a list of g_form methods you can use which allow you to do the following:

g_record Glide Record methods make calls to the database on the server without having to use mySQL and uses the gr object.

The GlideAjax API sends work to the server using a script include with the ajax object.

Here is a tutorial on making your first client script using JavaScript and the GlideForm API. We are just going to do some simple date validation.

1. Make sure you use your personal developer instance of ServiceNow before continuing onto the next step.

2. In your navigation bar, search for "Maintain Items" and head to that page.

3. Create a new Catalog Item called "About Me" (you can name it something else if you'd like)

4. Fill out the short description and hit 'Submit'

6. After creating your new variables, scroll down to the bottom of the page and select Catalog Client Scripts

8. Make sure to select "Mobile/Service Portal"

9. We're going to create an onChange() client script to verify that the user filling out the form selects a date in the past. So on the upper right side of the form, select onChange() under the Type field.

11. Make sure that the checkbox for Applies to a Catalog Item View is checked.

12. After onChange() has been selected, the Script field should automatically be filled with a generic onChange() function. If not, copy and paste the following code:

13. Since we need to access a form value, we are going to use the g_form API we mentioned earlier. Underneath the closing bracket of the if statement, create a new variable (here we are calling it dat) and assign it to a g_form.getValue() method which selects the birthdate variable in order to access the value selected by the user, like this:

14. Since we need to compare Date() objects, we next need to declare a new variable called bday and assign it to a new Date() object which takes dat as an argument.

15. Next, we need to make sure that the date selected is not a future date, since you obviously were not born in the future. So now we create a new variable called today and assign it to a a new Date() object as well. If given no arguments, the JavaScript Date() object defaults to the current date: var today = new Date();

16. Next, we need an if statement which takes a condition that compares the two Date() objects. This is done to check if the bday value is less than today in order to see if the birthdate is a future date, which is not an acceptable value.

17. Inside the if statement, we want to a window pop up to alert the user that the date they've selected an invalid date if the if statement condition evaluates to true. The alert() window should read something like this: "The date selected is in the future, please select a date in the past"

18. Next, we want to reset the Birthdate field since we need the user to reselect a new date. Again, we are going to use the g_form API to set the birthdate value to empty by using gform's setValue() method. setValue takes two arguments, the first being the _variable of which you wish to set, the second argument being the value you wish to set the variable to. By now your code should resemble this:

19. Now, click Update & Exit. This should redirect you to your Catalog Item.

20. On the upper right corner of the page, click Try It

21. Fill out the About Me form and try to choose a future date as your birthday.

22. You should see an alert window tell you that your choice is invalid. When you close the alert message, you should see that the Birthdate field has been set to empty.

Other things to try: #